PIP-II comprises an 800-million-electronvolt linear accelerator, or linac, based on superconducting radio-frequency technologies. Recent advancements in SRF technologies, both at Fermilab and at partner laboratories in the U.S. and around the world, allow the construction of this unique accelerator. Upon completion, PIP-II will accelerate protons at up to 800-million-electronvolt, or 800 MeV, over its 215-meter length, with an instantaneous beam power of more than 1 megawatt. Watch this two-minute video to see a full rendering of the linac. 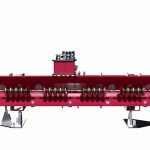 The raw materials are protons — lots of them

These protons will be used to generate other types of particles for multiple experiments, including the Deep Underground Neutrino Experiment and the Mu2e experiment.

But where do these protons come from?

The protons start at rest as nuclei in a bottle filled with hydrogen gas. Because hydrogen gas is electrically neutral, it cannot be accelerated as is — it is necessary to break it apart and form an electrically charged ion. In PIP-II the ion used is called H-minus, which consists of a proton with two electrons attached. This transformation from hydrogen gas to H-minus takes place in an “ion source” that delivers ions at an energy of 30,000 electronvolts. At this point the ions are moving relatively slowly, about 0.7 percent of the speed of light.

The first stage of acceleration

The initial stage of acceleration downstream of the ion source is via a device called a radio-frequency quadrupole, or RFQ. When H-minus ions enter the RFQ, electromagnetic waves that oscillate many millions of times per second accelerate them. These waves are known as radio-frequency waves, because their oscillation frequencies are similar to FM radio stations and radar sources. As with a surfer, the ions need to be precisely synchronized with the waves to get an energy boost — and, in the case of PIP-II, the synchronization has to be much better than a billionth of a second.

The RFQ is about 4 meters long, constructed of copper and operates at room temperature. The electromagnetic waves in this section oscillate 162.5 million times per second, or at 162.5 Megahertz. The H-minus ions emerge from the RFQ with an energy of 2.1 MeV. At this point the velocity of the ions is about 7 percent of the speed of light.

The H-minus beam then makes its way through a straight beamline section that prepares it to meet the superconducting linac. Electromagnets focus and steer the beam in this section.

How the beam will power discovery when it leaves PIP-II

The beam that emerges from the PIP-II linac will be directed to the Fermilab accelerator complex. A portion of the beam will be injected into the existing Booster ring, which will strip the two electrons from the H-minus ions and then accelerate the bare protons to 8-billion-electronvolts, or 8 GeV.

These protons are then transferred to the existing Main Injector-Recycler complex where they are further accelerated to 120 GeV. From there, they are directed onto the Long-Baseline Neutrino Facility target. Nuclear interactions in the LBNF target produce copious amount of subatomic particles called pions, which quickly decay, releasing neutrinos in the process. Hence, the LBNF neutrino beam for the Deep Underground Neutrino Experiment is formed.

However, the PIP-II linac will be able to deliver considerably more protons than needed for the DUNE at LBNF research program. These extra protons can be delivered either to the Mu2e experiment at an energy of 800 MeV or further accelerated in the Booster to deliver to intermediate energy neutrino and muon experiments. The PIP-II linac’s flexibility creates many opportunities that will be more fully explored in the future.